Virgil Abloh, who rose from American streetwear savant to become, in 2018, the artistic director of men’s wear for Louis Vuitton, and guru to millions with his own label, Off-White, died on Sunday, according to a notice published on his Instagram account. He had been privately battling cardiac angiosarcoma, a rare cancer of the heart, since 2019. He was 41 years old.

Abloh, a first-generation Ghanaian-American who had been the creative director to his friend and collaborator Kanye West, was that rare thing in fashion: a name-brand designer whose influence was felt outside of fashion’s usual self-selected niches, a veritable pop-culture icon. Some of this was due to his designs, whose flourishes — his trademark Off-White™ logo, his winky use of quotation marks splattered on clothes, shoes and accessories, the hazard-yellow band liberally applied to handbags and underwear alike — made them instantly recognizable. But it owed just as much to his insistence on remaining culturally omnivorous: DJing, curating, collaborating (with Nike, with Takashi Murakami, with Levi’s, with Ikea), and generally refusing to be limited to the usual avenues of luxury fashion. He was not only the rare American to succeed at a major European house, but even rarer, a Black designer in a still predominantly white milieu. And he did it with a rare energy, piling projects on projects in multiple time zones and across the world. Nor did it ever seem to sate his fans. Not only had he designed enough before his 40th birthday for the Museum of Contemporary Art in Chicago to hold a retrospective, it was also extended, by popular demand.

It represented gatecrashing of the highest order, success at the highest echelons of an industry that hadn’t always been interested in his contributions. This success influenced a generation of Black designers and influencers. Victor Glemaud, a designer and creator of In the Blk, a Black fashion collective, said that he was “one of their first and most active members.” Luka Sabbat, a fashion influencer, wrote: “Thank you for breaking boundaries and pushing the conversation forward.”

Born in Rockford, Illinois, to immigrant parents, Abloh first studied engineering, and then architecture. Working for a firm in Chicago, he became involved with the local fashion scene, eventually opening up his own shop, RSVP Gallery, and connected with another rising Chicagoan, West. When the two first began showing up at fashion events, they were not always enthusiastically welcomed. A young Virgil is seen at the side of West in a 2009 street-style photo snapped by Tommy Ton in Paris, which led not to an industry embrace but a parody on South Park. When Abloh and West interned together for Fendi in 2010, their contributions weren’t rated too highly, either. “Me and Virgil are in Rome, giving designs to Fendi, over and over, and getting our designs knocked down,” West described it to Zane Lowe in a BBC1 interview in 2013, the same year Abloh founded Off-White. “[We] brought the leather jogging pants six years ago to Fendi, and they said ‘no.’ How many motherfuckers you done seen with a leather jogging pant?” Seven years later, LVMH, Fendi’s parent company, had not only hired Abloh for Louis Vuitton, its largest and most treasured brand, but giving him an expansive role company-wide, touching its wine and spirits portfolio and its hotels and hospitality brands as well as fashion. (It also purchased a 60 percent majority stake in Off-White, for an undisclosed amount.)

Abloh’s genius was for connecting directly with young fans and young consumers, whose desires and needs he seemed perennially able to anticipate and cater to. “Everything I do is for the 17-year-old version of myself,” he said. Where he went, lines formed, and what he touched, often sold out (and then sold out again on resale marketplaces). “We have never had a lineup around the block to get into an exhibition,” Nick Simunovic, a director at Gagosian, marveled to me in 2018 when Abloh and Murakami put up a collaborative show in London, and at least one of his shows during Paris Fashion Week became a mobbed crush, with PRs shepherding harried Vogue editors of a certain age through the fray. His pieces became status symbols for a rising generation of fashion fanatics and, more than ever, fanboys: “Cannot be seen in that shit from the other day,” Gunna rapped on Lil Baby’s “Never Recover.” “Virgil just chef’d me a whole different colorway.” (Not that Abloh’s appeal was limited to young men; Hailey Bieber got married in a Off-White gown, trailing a train reading, Ablohishly, “Till Death Do Us Part,” quotes included.)

Within fashion circles, criticism bubbled under the surface—and occasionally broke above it—that his designs were not original enough, borrowed too freely from the designers (like Hedi Slimane, Raf Simons, and Rei Kawakubo of Comme des Garçons) whom he worshipped. Sometimes these designers themselves took swipes at him; Simons, in an interview with GQ Style in 2017, said that while he thought Abloh was a “sweet guy,” “I’m inspired by people who bring something that I think has not been seen, that is original.” But these critiques neither slowed Abloh’s ascent, nor seemed to bother him much. Simons’ take, Abloh said in a subsequent interview with W Magazine, “​​shows the line in the sand” between two generations: an older one that insists on hierarchies and lineages and a younger one that dismisses them. From his earliest days, at the helm of a small, start-up label he called Pyrex Vision, he had been insisting on the right to, essentially, remix existing designs to make them his own: Pyrex’s early hit pieces included vintage Ralph Lauren shirts over-printed with Abloh’s own graphics, which raised hackles (not least for the sevenfold markup price) but also sold out. He told The New Yorker in 2019 that among his “cheat codes” for fashion was, in his words, the “three-percent approach,” of creating something new by tweaking an existing design by three percent. Three was enough.

If Abloh’s approach represents a generation shift, it’s one that has appealed to the older guard that holds the purse strings, too. Bernard Arnault, the CEO of LVMH, the group that owns Louis Vuitton, said in a statement on Sunday that Virgil was “not only a genius designer and a great visionary, he was also a man with a beautiful soul and great wisdom.” With his diagnosis kept a closely guarded secret, Abloh remained active and, at least outwardly, pursued the multi-pronged, multi-tasked projects that defined his life; at the time of his death, Vuitton was planning a men’s runway show in Miami to take place this Tuesday, one of a series of nomadic, one-off shows, as part of the Art Basel fair, which will proceed as planned. His survivors include his wife, Shannon Abloh; his children, Lowe and Grey; his sister, Edwina Abloh, and his parents, Nee and Eunice Abloh.

It is hard to think of a designer who more distilled his or her moment—the frantic pace of the digital, the immediate accessibility of references, the fading stakes of soi-disant authenticity, the collapsed divide between celebrity culture and street culture—than he did. But he rushed toward it all with a generosity that’s rare. Bruce Pask, the men’s fashion director of Bergdorf Goodman and Neiman Marcus, reminded me how Abloh, for his first show at Louis Vuitton, invited not only the press, but also a phalanx of students and fans to line the runway: If he had made it, he was bringing everybody with him. His was a dream without precedent, but his alchemical mix of enthusiasm and eye carried the day. “I’ve never heard Virgil say a negative thing in my whole life,” his friend and collaborator Justin Saunders, of the website JJJJound, told GQ Style. “What I knew about creativity was saying no to things, but he’s on the opposite flip. It’s like when Virgil convinced me to be a DJ,” Saunders said. “I still don’t know how to use a mixer. I said to Virgil, ‘I don’t know how to DJ,’ and he said, ‘It doesn’t matter. Let’s just go have some fun.’ And then eventually we were DJ’ing at Coachella.”

Get the Cut newsletter delivered daily


By submitting your email, you agree to our Terms and Privacy Notice and to receive email correspondence from us.

Mon Nov 29 , 2021
High demand, combined with supply chain delays, materials’ shortages and troubles hiring workers, are shrinking the availability of items both online and at stores. As customers get closer to the last minute, physical stores will become a more appealing option for shoppers than waiting around for delivery, analysts expect. Even […] 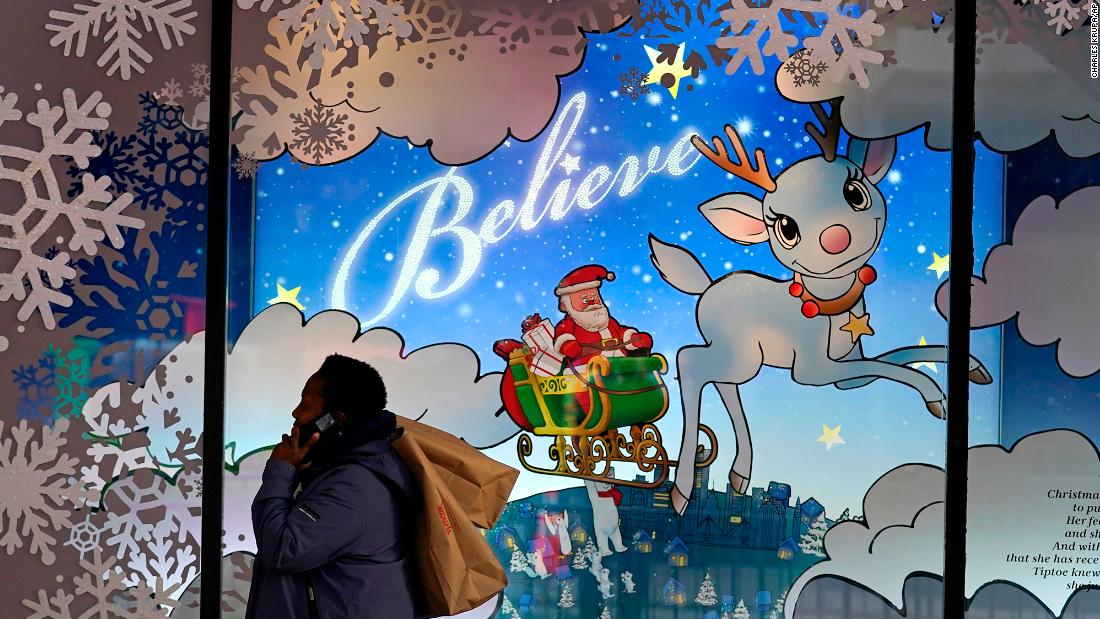