HAVANA EYE ON YOU

You have to hand it to Nikki Creedon of Havana boutique in Donnybrook in Dublin, who is showcasing special items commissioned from her instore designers for two weeks, but also a pop-up of rugs from Connemara Carpets, pottery from Fermoyle pottery and silk and velvet womenswear from a new Irish brand called Geito by Gwen McNulty.

There will be pieces from designers Colin Burke, Sarah Murphy and the Landskein, but also knitwear from Castanea, Sphere One, Sian Jacobs, Avant Toi and Hache.

The boutique’s festive air comes courtesy of Christmas evergreens from Apassionata, a selection of coffee table books for Christmas gifts and various perfumes (including Irish brand Scopoli) and jewellery from Simone Rocha, Lea Hoyer from Denmark and others. The popup runs from next Thursday, November 4th for two weeks.

One way of emboldening an outfit without spending a fortune is adding a bright or zany collar. Galway stylist Máirín Ní Bheacháin knows how to cut a dash with her Mise line of collars made from recycled vintage fabrics that come in four styles, Peter Pan, Rock Chick, Layla, Frida and Joe – find them on her website misecollars.com.This one, for instance, is in faux leather with tassel trim €65. Postage in Ireland is €5.

Fashion industry veteran Sarah Rickard has just launched her first online boutique featuring a “modest” edit of chic, but wearable brands that have proved popular with her 20,000-strong Instagram audience.

Rickard has notched up many credits during her 17-year career, having worked as a stylist, creative director, personal shopper and fashion buyer. Her own playful personality, honest approach to dressing and sense of style means she is a trusted adviser offering sophisticated but not so well-known labels like Parisian brand Suncoo and Second Female from Denmark that appeal to her many fans at home or at work.

Watch her #TryonTuesday series to see what clothes look like on real women or book a one-to-one styling appointment at her in-house studio in Ratoath, Co Meath via styledby.ie.

As autumn draws in, out comes the comfort of woolly sweaters. At IrelandsEye, one of our country’s biggest knitwear manufacturers exporting Irish sweaters all over the world, designer Aisling Duff is really making her mark. Their new luxurious loungewear collection called Kindred in flattering generously proportioned shapes is made from soft touch merino. It comprises sweaters, a cardigan, long vest and cropped hoodie along with leggings and wide-leg culottes.

Colours are fresh and feminine – smoke, grey, mauve, pink and blue and the collection is made and hand finished at their north Dublin headquarters at prices from €99.95. Watch the film at https://youtu.be/bV5rvxonNP1s or visit irelandseyeknitwear.com

Dublin-born artist and photographer Aoife Casey – now based in Seville – paid a visit home a few months ago and found time for a romantic fashion shoot in the Glebe Equestrian Centre in Wicklow. “It’s a homage to the beauty of Ireland, its colours, diversity and talented local designers and has elements of folk fashion which I feel is in revival,” she says.

Most of the clothes, Victorian in spirit, with their lush laces and layering, are by National College of Art and Design graduate Sarah Caine, with FAO millinery from Freya Oatway. Styling by Vanessa Prezotto.

The estate of Karl Lagerfeld who died in February 2019 is to be sold by Sothebys in Monaco, Paris and Cologne in December where more than 1,000 design objects will be auctioned. Significant artworks and clothing – including the designer’s signature fingerless leather gloves as well as Rolls Royce cars – will go under the hammer at a sale estimated to stretch to March of next year.

Art historian Patrick Hourcade’s new book Karl: No Regrets is a well-timed biography of the designer told through hitherto unpublished documents that reveal his splendour and weakness. The pair met in 1976 and developed a friendship that lasted for more than 20 years based on a shared passion for 18th century arts “and the only indecency being our lavish spending”. It covers Paris in the 1970s extensively and the many characters who populated the life of the designer from the early days to the end. Karl: No Regrets is published by Flammarion on November 2nd.

Lab grown diamonds feature in Chupi’s latest collection inspired by her family heirlooms, “but also the pieces that I miss in the world, that I want for my moments”, she says. With lab-grown diamonds, “you get a phenomenal amount of sparkle, but a hugely reduced environmental impact”, she adds.

Her pieces are made with these diamonds and recycled gold feature amulets, lucky clovers, the North Star signet ring and the Follow Your Dreams ring along with Chupi’s signature Love is All ring with a ruby gemstone flanked by two diamonds on a solid 14 carat gold band.  Prices start at €399. Visit chupi.comor the Chupi store on the top floor of Dublin’s Powerscourt Townhouse.

Irish menswear brand Ilk Clothing – who established a reputation for stylish new takes on traditional workwear – have joined forces with shoemakers Padmore & Barnes in Kilkenny on a new version of the classic Wallabee. A handstitched moccasin with reworked details, it’s a classic design that has been a staple in many wardrobes for more than 60 years.

The durable crepe sole is made from the sap of the Hevea rubber tree and though the Wallabee was originally made in Kilkenny, the new versions are made by hand by the residents of Felgueiras in northern Portugal. The moccasins, €160 a pair, are on sale this month and come in colours called grain and stout and can only be bought from Ilk’s online shopilk.ie

Sat Oct 30 , 2021
Six-year-old Areia Perdios darts through capes, hot-dog suits and warrior-queen sets. Spirit Halloween has popped up on 57th Street in New York, just a few blocks from her home, and in a few days it will be gone—leaving as suddenly as it arrived. “You kind of wait for it,” says […] 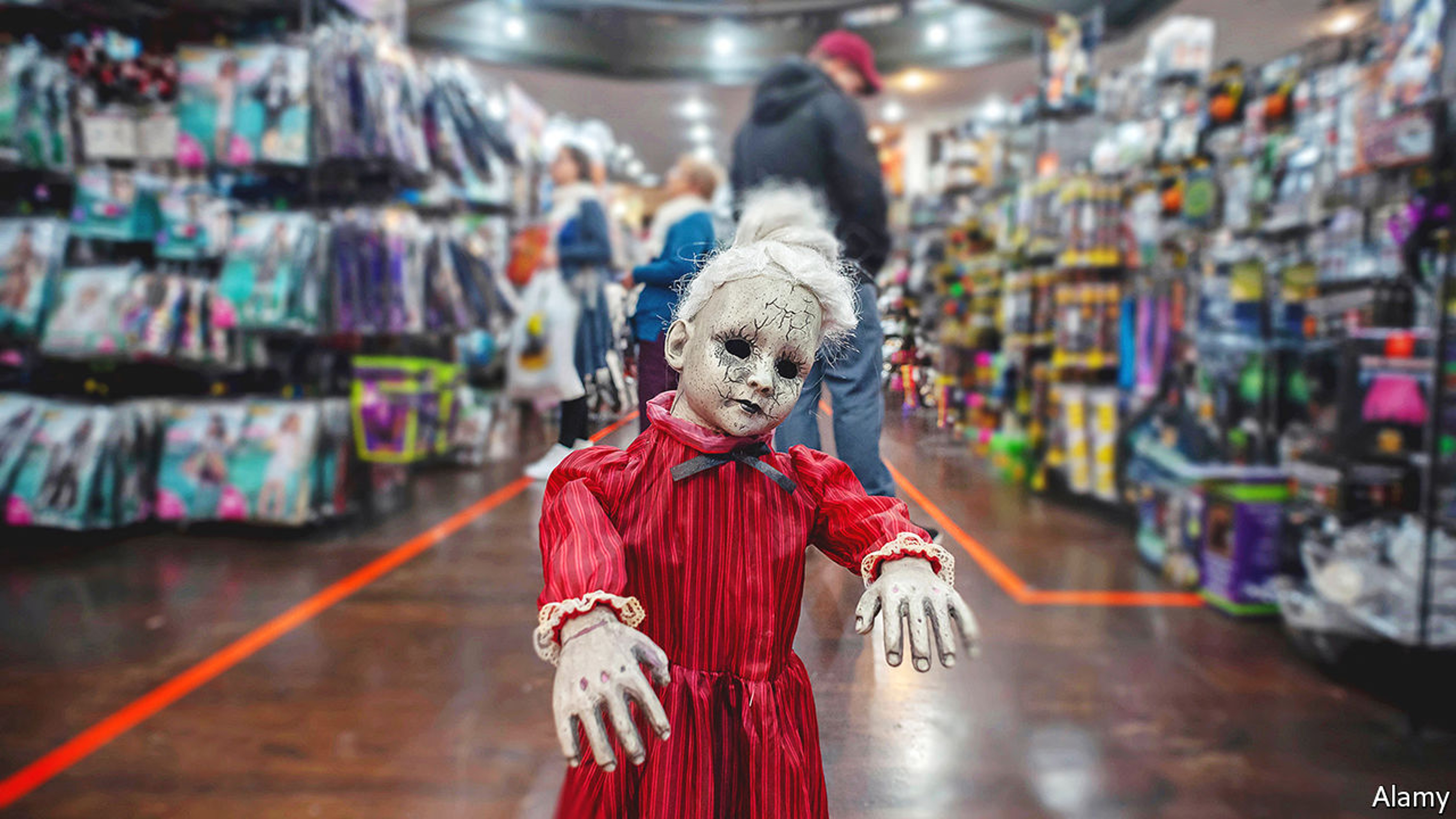