For nine decades, the treasure-filled windows of the historic Margulis Jewelers made visitors rushing through Portland’s busy downtown stop in awe at the sight of delicate, vintage-styled gemstones.

‘This was an agonizing decision—it was never our plan to close our doors,’ Margulis, who took over the reigns  from his father, Jerome, in 1985, wrote in a letter to customers.

‘But Portland has experienced the perfect storm of adversity and independent businesses simply cannot withstand the economic forces which have caused the deterioration and resulting emptiness of Downtown Portland,’ he added.

Margulis had long decried the area’s descent into violence, blaming city officials for ‘doing the talk, but not walking the walk,’ and exacerbating the issue with woke policies.

In a last resort to save his decaying business three months ago, Margulis conducted a ‘survival sale,’ marking 20-40percent off the store’s entire multi-million dollar inventory.

The measure was not enough to balance out the 72percent decrease from foot traffic in the downtown area – and the homeless encampments and riots driving away potential customers.

The Rose City has been seen robberies spike 47percent in the year to date through January and is on track to surpass last year’s record-breaking homicide rate – with murders up 10 percent this year compared to the same time last year.

The city, which slashed its police budget in the wake of protests over George Floyd’s murder, set a record last year with 92 homicides – the highest since there were 70 homicides in 1987.

The record violence comes despite the police department introducing a new Focused Intervention Team that hit the streets in January.

The team is designed to address gun violence and the proliferation of the deadly weapons in a city where around 75 percent of victims are killed through gun violence. 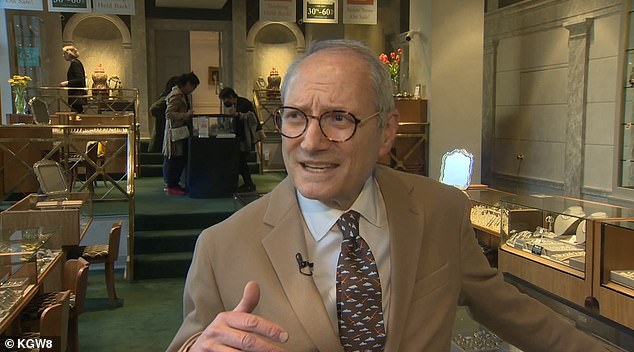 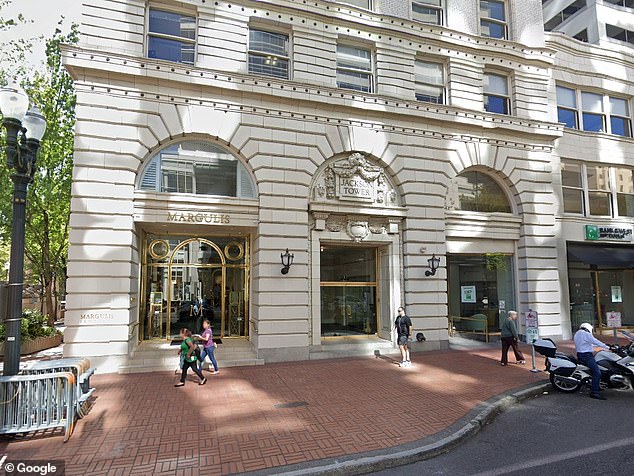 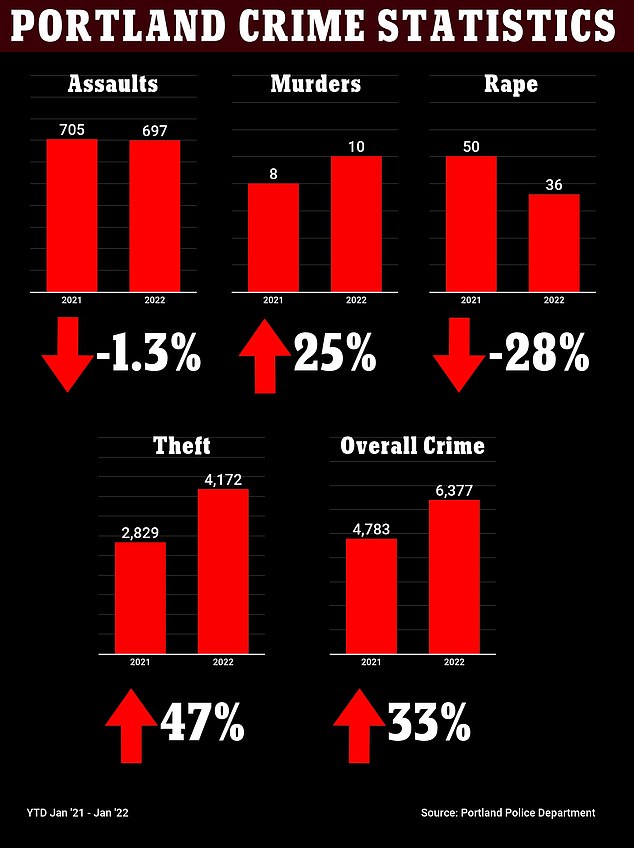 The store was forced to shut down as homeless encampments, rioters and rising crime drove away even more customers 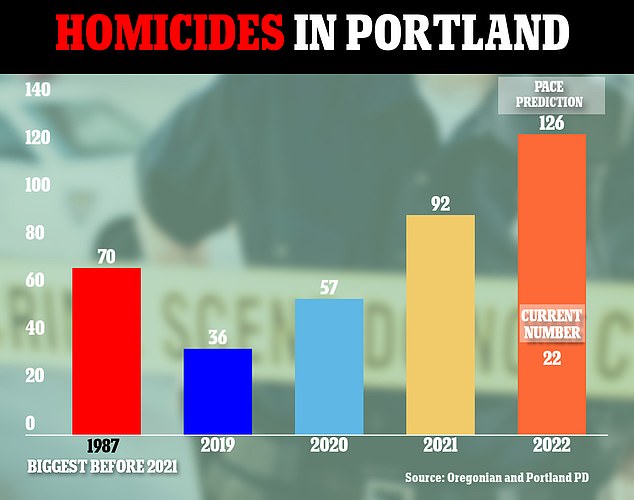 Like Margulis Jewelers, many businesses in the area will likely not bounce back from pandemic woes and the riots in the aftermath of George Floyd’s murder by Minneapolis cop Derek Chauvin.

Goldmark Jewelers, just a block away from Margulis, had to close its doors last year after 46 years in business.

Throughout the pandemic, businesses complained of homeless people in the area sleeping and using their storefronts as public bathrooms and rioters targeting the stores.

‘In the daytime, you know, like the man peed all over the window,’ Jen Habash, owner of The Blue Lobster, told CBS last year.

‘Honestly, instead of it being a bathroom issue, I feel like it’s more of a mental health issue,’ he added. ‘I feel like they’re angry, and we just don’t know what to do about it.’

Kassab Jewelers’ downtown location shut down after the store was looted during a riot in May 2020, The Oregon Live reported. 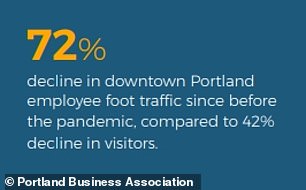 Customers have yet to return to the downtown area, as businesses struggle

Margulis blames the fate of his business on city official’s inability to tackle the rising crime.

‘There is just a  broken downtown and people don’t want to come [here]. The employees aren’t coming to their buildings. The shoppers aren’t coming down,’ Margulis told local news station KOIN.

‘And our city has done too little, too late to help downtown and independent merchants.’

Last year, Margulis pleaded for help, asking Governor Kate Brown to send the National Guard to force rioters out of the area.

‘They’re a bunch of bored people out there making trouble and using the guise of social justice,’ Margulis told KOIN. ‘They’re destroying our downtown.’

In his letter to customers on March 3, the owner announced he was selling jewelry at a discount between 40percent and 70percent off until Saturday, before shutting down the business in the following months.

Employees and visitors have yet to make their return downtown, with 1.3million customers going to the stores on December 2021 compared to 2.1 on December 2019, according to the Portland Business Alliance.

More than 1million people worked downtown pre-pandemic. Today, just over 350,000 are employed at the stores in the areas. 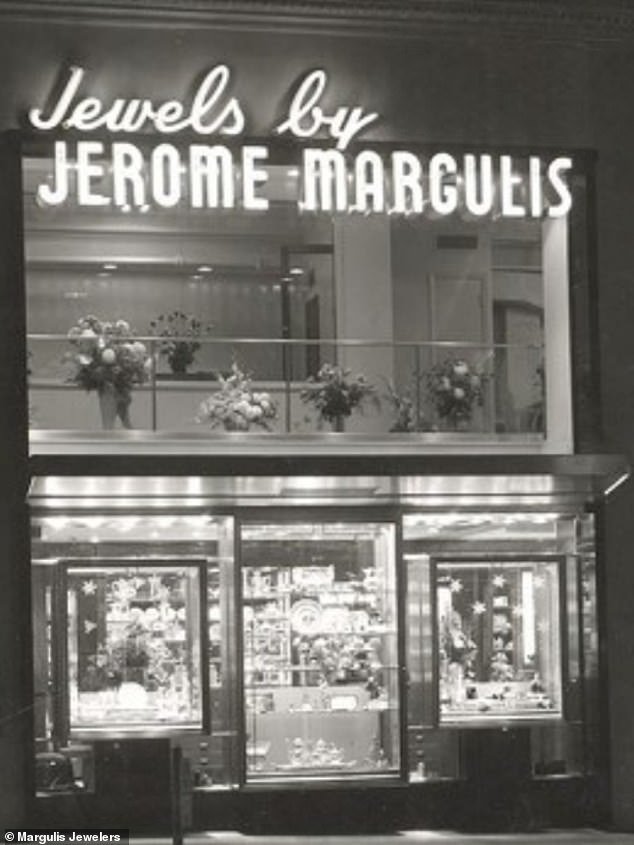 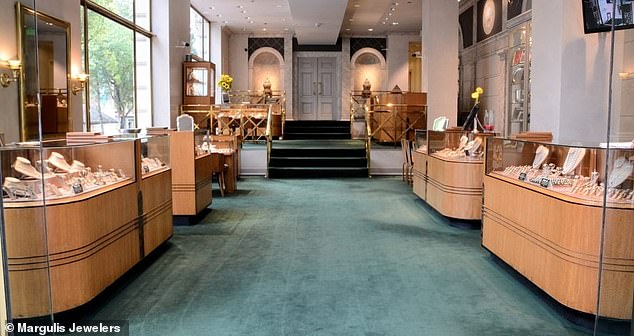 Employees and visitors have yet to make their return downtown, with 1.3million customers going to the stores on December 2021 compared to 2.1 on December 2019, according to the Portland Business Alliance. More than 1million people worked downtown pre-pandemic. Today, just over 350,000 are employed at the stores in the areas

Portland topped off February with 22 murders – up from the 19 in 2021 – and is on track to hit around 130 by December, according to the Oregonian.

The Portland Police Bureau suffered through a rash of retirements and resignations after Portland politicians embraced calls to defund the police.

A total of $15million was initially chopped from the city’s budget, with progressive Portland prosecutors also blamed for the spiraling crime for refusing to charge 70 percent of people arrested by the city’s police.

The record violence comes despite the police department introducing a new Focused Intervention Team that hit the streets in January. The team is designed to address gun violence and the proliferation of the deadly weapons in a city where around 75 percent of victims are killed through gun violence.

Like Margulis Jewelers, many businesses in the will likely not bounce back from the pandemic woes and 2020-21’s protests against police and racial tensions. Goldmark Jewelers, just a block away from Margulis, had to close its doors in 2021 after 46 years in business 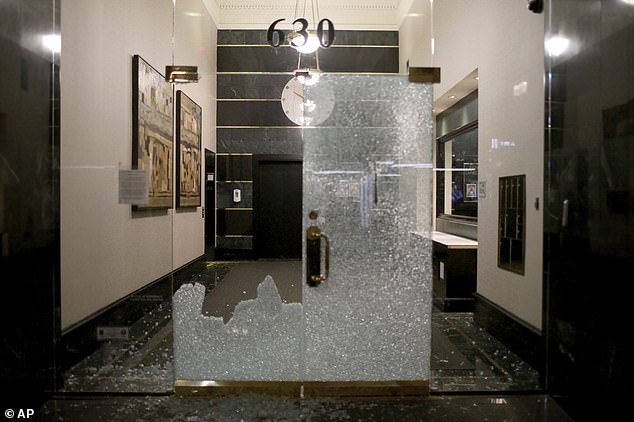 Last year, rioters took over the downtown area, as the city slashed its police budget in the wake of protests over George Floyd’s murder 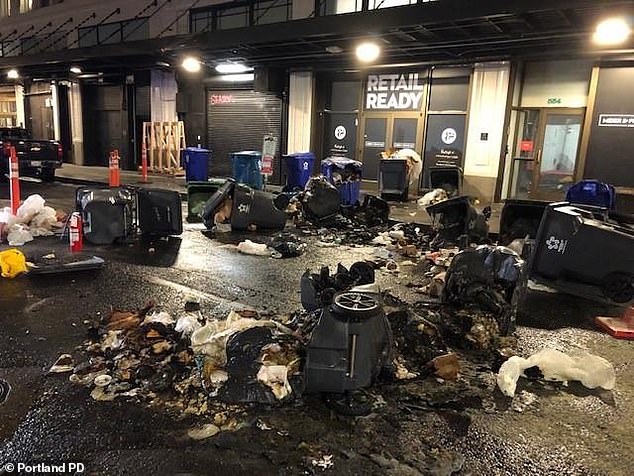 Throughout the pandemic, businesses complained of homeless people in the area sleeping and using their storefronts as public bathrooms and rioters targeting the stores

A Portland gem that first gained its luster despite Depression

Jerome Margulis, the son of Jewish immigrants from Russia, took a chance on opening his jewelry store in the heart of Portland 90 years ago as the country was in the midst of the Depression.

Still, optimism was high in the Rose City, according to report from nine decades ago.

Jerome Margulis opened his jewelry store in downtown Portland in 1932, in the midst of the Depression

‘A visit was made by the editor this week over the city of Portland and surrounding vicinity, on a hunt for the brute, so called ‘Depression,’ an article by the Portland Herald read.

‘The animal could not be found anywhere, neither any trace of him, but on the contrary we found the following.’

The piece goes on to detail the seemingly bright future as a $70,000 high school was being built in 1932 – the same year Margulis opened his store at the corner of SW Broadway and SW Yamhill Street.

On nearby Main Street, two new buildings and a state-of-the art hotel also had just been erected, according to the report.

Those who had lost their jobs during the Depression were finally returning to the workforce, with the Strawberry Crate Company, which produced ‘the best crates ever,’ employing many.

The article added: ‘Tobacco barns were found overflowing with the finest air cured and dark fired tobacco. All outhouses were filled to overflowing with corn and hay, the barnyards and chicken yards were full of fine fowls, and all odd lots had pigs.’

The unit was initially met with backlash, as some believed the police were reviving the Gun Violence Reduction team, which was accused of racial profiling, but Police Chief Chuck Lovell assured the public the team would focus on guns, not gangs.

The police department has also partnered with community outreach programs to fight the violence, including a Crisis Response Team – a group of trainee individuals that respond to critical incident calls involving death or other traumatic events, among others to ‘organize resources and to focus on chronic offenders and locations to address neighborhood concerns.’

‘What we want to see is that people start getting the resources that they need, so they’re not turning to violence. And then hopefully, we’ll start to see not only our homicide, but also our shooting numbers, go down,’ Assistant Police Chief Jami Resch told the Oregonian.

Other groups include Girl Strength – a self-defense class for girls 10 to 14, the African American Advisory Council and the American Muslim Police Advisory Committee.

‘We’re trying to take a holistic approach, knowing that we can’t just have a law enforcement, punitive answer,’ Resch said.

The holistic approach has yet to yield results.

In addition to the surging murder rate, the city has also seen a significant number of shootings in the first two months of the year, totaling 264, up from the 190 during the same time last year. Gun-related injuries are also up – 68 compared to 64.

The Portland Police Bureau also reported that out of the 22 murders this year, all but one have been gun-related. Portland’s 21st murder happened in Dawson Park during the daytime, a third murder there in the last 15 months.

Violent crime has risen across the board throughout the Rose City, with assaults, kidnappings and rape all seeing sharp increases.

The Best K-Beauty Products, According to Korean Skincare Experts

Sat Mar 12 , 2022
The K-beauty craze has been going strong for years, after first taking off in the Western world in 2011 with the introduction of BB creams—blemish balm creams—which had been popular in South Korea from the 1980s. Making the most of the country’s advanced cosmetic industry, which has been decades ahead […] 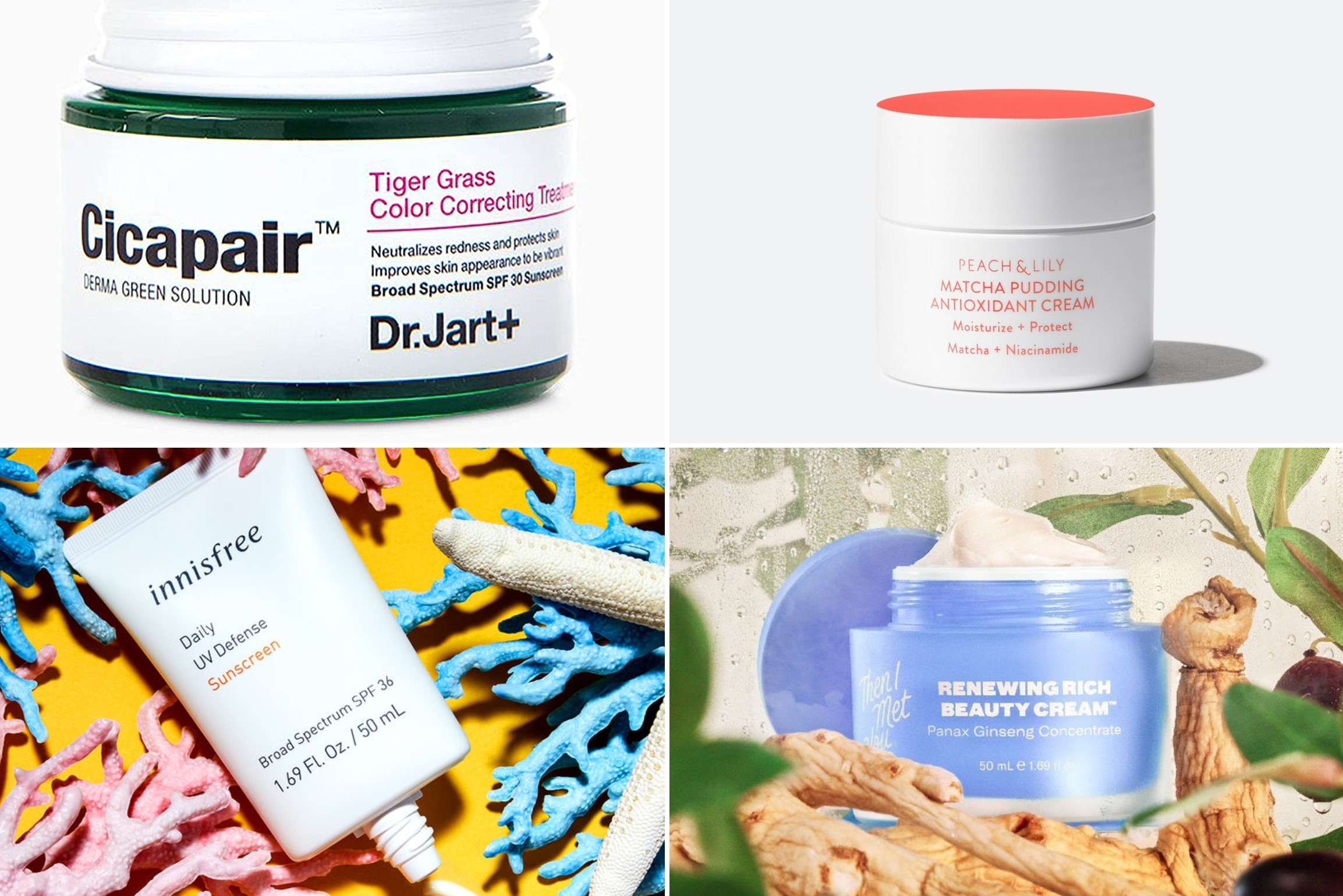